What Are The Risks Of Value Investing In India?

I have mentioned before that I opened my first brokerage account in 2008, right after I got my first full-time job. And I had no idea about value investing or any other sort of investing. The first stock I wanted to buy was DLF, it was around 800 rs and Unitech, which is almost nonexistent today. DLF is still in business but with corporate governance issues and whatnot. The real estate market was boiling hot back in 2008 and mostly it was entering a cool-off period. Properties rose in value after 2000 and for the last 4 – 5 years, there is no appreciation, basically, the prices are going down or staying where they were in the last 5 years. This post is not about the real estate sector in India, but before I move to the real point, let me make a quick point, everyone thought land supply is limited and the population in India is exploding, so the demand will never go down. Everyone forgot about the affordability factor. India is a price-sensitive country. Anything that is affordable will sell like hot cake or freshly baked sliced bread, but these apartments are anything but affordable. And real estate became a Ponzi scheme. Everyone wanted to buy cheap and then flip to the next person for a profit. As new buyers stopped entering the market the whole sector crashed. New buyers did not stop entering because nobody wants a house, but most people in India cannot afford such a high ticket item. Saying all these, remember, value investing in India is not impossible, but the real question is what are the pitfalls? Why are some stocks trading at low price when the market is so expensive?

Now, we can learn a lot from this industry. Most buyers wanted to flip and they did not have an idea about cashflow. Because in India, rental yield is around 2%. So, you better keep your money in bank that buying a rental property. Property dealings were shady. Lots of cash was used and everyone tried to save on taxes. Anyway, these shady practices impact other sectors too. That is why value investing is actually very risky in India, especially if you want to invest in cigar butts like Ben Graham was doing or at initial days Warren Buffet was doing.

The best examples would be the psu or public sector units, on face the stocks are cheap, and they are cheap because they do not grow, so nobody wants to buy them for long term.

I will give you 2 examples both should be fresh in your memory, as long as you have been tracking the Indian stock market since 2017. First is Reliance Communication. The matter is in NCLT. The stock dropped around 9rs in 2017-18, and then there was a rumor that Mukesh Ambani might buy those assets from a younger brother, for Jio. The stock spiked to 34rs. Anyway, the book value of the stock was around 30rs. They had towers and network assets, although they did not have their CDMA Reliance Communication network anymore. And 2019 is gone, nobody purchased those assets and shareholders lost a ton of money. The book value is irrelevant because it was showing how much the equipment or assets were to RCOM, as it turned out, nobody wanted those. The matter is in NCLT and Anil Ambani tried to resign. So, the company can be a source for some corporate drama but not any value.

Ben Graham or Warren Buffet might have used such a situation as a cigar butt. The company once up on time had a business, some brand recall, we still remember “karlo duniya mutthi mein”, it was available for a 50% discount on book value. But the business being CDMA in a GSM dominated nation is worth 0 rs.

The second example is also from the ADAG group. Reliance Capital. I have shares in this company because I am or was stupid. And this notional loss is the reason behind my post. I purchased the RCAP stocks for the same reasons. This company is a holding company for a lot of other businesses. And their stake in RNAM was worth more than the market cap of RCAP. But I made a mistake. the stake sale from RNAM was used to pay down debt. And book value eroded faster than hydrogen peroxide turns into water. Now the price is so low that selling does not make sense.  I would rather keep it as a reminder so that I do not make any hope of trade in the future.

Law and Order: Yes it is a factor before you consider value investing in India

We all know money brings power. We are small and tiny people in the stock market. So, if we are not protected by law, then there’s nothing to save us from the sharks. And in India, the laws are not implemented. Auditors run away whenever they feel like. Liquidation cases are dragged for years. So how do you believe or count on the numbers you see on the balance sheet? Either way, minority shareholders like us are often left high and dry. So, while investing in a company we as minority shareholders need to absolutely make sure that the management is A class.

I do not think things will never improve in India, 2 decades back Enron and Andersen happened in the USA. So, India will transform and be better too. But we need to survive before that day comes, to tell the tale.

You are not Warren Buffet so Value Investing In India might not be fore you:

If you have Snowball or if you follow Warren Buffet then you already know that he prefers to take a majority stake in the companies. Taking management control for a business with potential is completely different than what we usually do as minority shareholders. We often go for hope trade, and since nobody cares for our benefit, our hope trades often go south. There are so many other examples, think about Yes Bank, Vodafone Idea. Currently, these businesses are hope investments. Actually these are trade opportunities based on hope. These cannot be good investments. Analyze the business, their balance sheet, the business moat and you will see those parameters do not make these as good investment candidates. Only thing is, these might be good candidates for trades and chances are you and I will end up losing money.

To conclude, as I presented a few examples, there are some value stocks, those are owned by the Indian Government. The companies are infamous for inefficiency. And as we go for any government service, we know why. The government agencies’ first priority is not profit and they do not care about minority shareholders. The dividend yield is lucrative because the government will suck out all the cash in the form of a dividend. And after paying hefty dividends, the companies cannot focus on growing. But moreover, the return on equity or return on capital is horrible. That is why the share prices never go up. Now, one can purchase these stocks with the hope that these companies will be privatized and the stock prices will zoom. I cannot tell you if that is a good or bad idea. Because that will be another hope trade.

There is no listed stock in Indian stock exchanges with face value 200rs, but you can use “Current price <=200” query in screener.in to look up stocks currently trading at or below 200rs. But remember if you are trying to do value investing in India, looking at the stock price first is not a good place to start. Yes bank trading at 11rs , suzlon trading at 8 rs but there is barely any value left in those stocks. 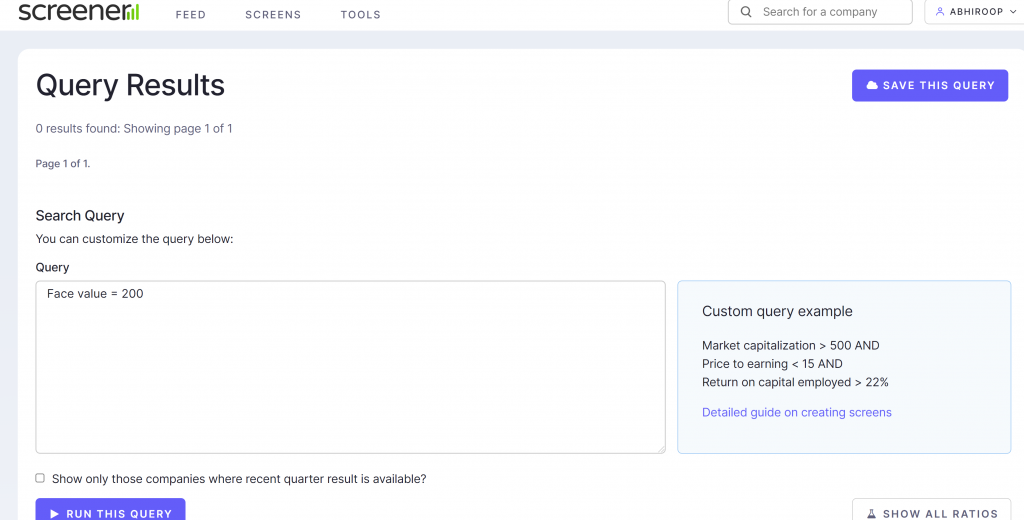 Is There Any Charges For Limit Orders In Indian Stock Market?

I have personally used Zerodha, Sharekhan , esPresso, and none of the brokers charge for placing limit orders. In fact, you should always place limit order, just to make sure you do not end up over paying.

One response to “What Are The Risks Of Value Investing In India?”